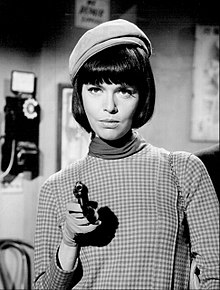 Barbara Feldon (born March 12, 1933) is an American character actress who works mostly in the theatre, but is primarily known for her roles on television. Her most prominent role was that of Agent 99 on the 1960s sitcom Get Smart. She also worked as a model.

I'm not saying that there's anything better than mated bliss at its best, but I'm saying that living ...

I'd like to meet a lovely man who shares my interests. On the other hand, I possibly will not. It's ...

Poetry is very crafted. You can't have too many words. It needs compression. It has to be spare, jus ...

The thing I love about television is that people watch you in their pajamas, and when they're eating ...

The secret of living a full life is to be fully engaged, moment to moment, to have something in your ...

For 50 percent of Americans marriage is forever, for the rest of us there is another adventure.

I've always supported myself. I like the sense of knowing exactly where I stand financially, but the ...

?Marriage takes work, but so does living alone. One of the things you have to work at is to have eno ...

?And that was then buttressed by that tremendous energy that he had and an intelligence that was qui ...

?He would start and a scene would just take off and you were there for the ride.?

?I've always supported myself. I like the sense of knowing exactly where I stand financially, but th ...

?I think he was very very proud of Get Smart , I think he really saw it as the highlight of his care ...

?Don in person was anything but bumbling.?

?People are born with comedy timing, it's very hard to learn and he was just naturally gifted in tha ...