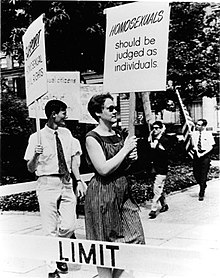 Barbara Gittings (July 31, 1932 – February 18, 2007) was a prominent American activist for LGBT equality. She organized the New York chapter of the Daughters of Bilitis (DOB) from 1958 to 1963, edited the national DOB magazine The Ladder from 1963–66, and worked closely with Frank Kameny in the 1960s on the first picket lines that brought attention to the ban on employment of gay people by the largest employer in the US at that time: the United States government. Her early experiences with trying to learn more about lesbianism fueled her lifetime work with libraries. In the 1970s, Gittings was most involved in the American Library Association, especially its gay caucus, the first such in a professional organization, in order to promote positive literature about homosexuality in libraries. She was a part of the movement to get the American Psychiatric Association to drop homosexuality as a mental illness in 1972. Her self-described life mission was to tear away the "shroud of invisibility" related to homosexuality, which had theretofore been associated with crime and mental illness.

Do you remember when we picketed the White House in 1965?

Equality means more than passing laws. The struggle is really won in the hearts and minds of the com ...

As a teenager, I had to struggle alone to learn about myself and what it meant to be gay. Now for [4 ...

Putting a label [homosexual] on myself was a big step forward...once I said, 'Yes, that's me, that's ...

What the homosexual wants, and here he is neither willing to compromise nor morally required to comp ...