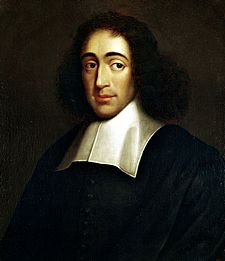 Baruch Spinoza (/b??ru?k sp??no?z?/; Dutch: [ba??rux sp??no?za?]; born Benedito de Espinosa, Portuguese: [b?n??ðitu ð? ?pi?n?z?]; 24 November 1632 – 21 February 1677, later Benedict de Spinoza) was a Dutch philosopher of Sephardi/Portuguese origin. By laying the groundwork for the 18th-century Enlightenment and modern biblical criticism, including modern conceptions of the self and the universe, he came to be considered one of the great rationalists of 17th-century philosophy.

Peace is not an absence of war, it is a virtue, a state of mind, a disposition for benevolence, conf ...

Do not weep; do not wax indignant. Understand.

Nothing in the universe is contingent, but all things are conditioned to exist and operate in a part ...

Sin cannot be conceived in a natural state, but only in a civil state, where it is decreed by common ...

Fame has also this great drawback, that if we pursue it, we must direct our lives so as to please th ...

Whatsoever is, is in God, and without God nothing can be, or be conceived.

God is the indwelling and not the transient cause of all things.

Of all the things that are beyond my power, I value nothing more highly than to be allowed the honor ...

Let unswerving integrity be your watchword.

Laws which prescribe what everyone must believe, and forbid men to say or write anything against thi ...

God is the efficient cause not only of the existence of things, but also of their essence. Corr. Ind ...

God and all attributes of God are eternal.

If anyone conceives, that an object of his love joins itself to another with closer bonds of friends ...

Fear cannot be without hope nor hope without fear.