Basil O'Connor (January 8, 1892 – March 9, 1972) was an American lawyer. In cooperation with US President Franklin D. Roosevelt he started two foundations for the rehabilitation of polio patients and the research on polio prevention and treatment. From 1944 to 1949 he was chairman and president of the American Red Cross and from 1945 to 1950 he was chairman of the League of Red Cross Societies. 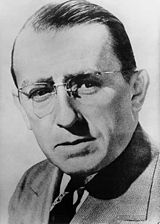