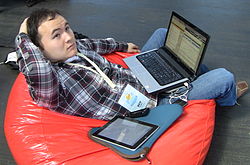 Ben Parr (born February 12, 1985) is an American journalist, author, venture capitalist and entrepreneur. He is the author of Captivology: The Science of Capturing People’s Attention, a book on the science and psychology of attention and how to capture the attention of others. He is the co-founder and CMO of Octane AI, a chatbot creation company. He was previously a venture capitalist, the co-editor and editor-at-large of Mashable, and a columnist and commentator for CNET. In 2012, he was named to the Forbes 30 Under 30.

Building a successful company (or living a happy life, for that matter) is not about embracing someo ...

Entrepreneurs may be brutally honest, but fostering relationships with partners and building endurin ...

Windows Updates have sometimes been a pain point for users. The update pop-ups can interrupt a movie ...

With every inch of land on Earth now catalogued by our satellites, the stars are the next place we a ...

More and more, the things we do in real life will end up as Facebook posts. And while we may be cons ...

Google is famous for making the tiniest changes to pixel locations based on the data it accrues thro ...

The big reason why we don't have space colonies and regular trips to the moon is that flying into ou ...

The world's most successful entrepreneurs play hard, but they work even harder.

I'm proud to call myself a Mashable alumnus.

Relationships are the key element to Press & PR

Starting a company is a cause, not a job. Once it becomes a job, that's when you lose

The more PR buzzwords you include in your press release, the less likely I am to write you up

Trending topics helped make Twitter a more relevant metric of what the world was talking about at an ...