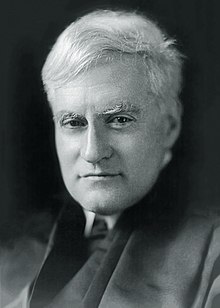 Benjamin Nathan Cardozo (May 24, 1870 – July 9, 1938) was an American jurist who served on the New York Court of Appeals and later as an Associate Justice of the Supreme Court. Cardozo is remembered for his significant influence on the development of American common law in the 20th century, in addition to his philosophy and vivid prose style. Cardozo served on the Supreme Court six years, from 1932 until his death in 1938. Many of his landmark decisions were delivered during his eighteen-year tenure on the New York Court of Appeals, the highest court of that state.

I take judge-made law as one of the existing realities of life.

Due process is a growth too sturdy to succumb to the infection of the least ingredient of error.

There are vogues and fashions in jurisprudence as in literature and art and dress.

The great ideals of liberty and equality are preserved against the assaults of opportunism, the expe ...

The Constitution was framed upon the theory that the peoples of the several states must sink or swim ...

Prophecy, however honest, is generally a poor substitute for experience.

Opinion has a significance proportioned to the sources that sustain it.

The final cause of law is the welfare of society.

Consequences cannot alter statutes, but may help to fix their meaning.

Fraud includes the pretense of knowledge when knowledge there is none.

What has once been settled by a precedent will not be unsettled overnight, for certainty and uniform ...

Justice is not to be taken by storm. She is to be wooed by slow advances. Substitute statute for dec ...

In the end the great truth will have been learned that the quest is greater than what is sought, the ...

The risk to be percieved defines the duty to be obeyed.

?Method is much, technique is much, but inspiration is even more.?