Bernardo Alberto Houssay (April 10, 1887 – September 21, 1971) was an Argentine physiologist who, in 1947, received one half Nobel Prize for Physiology or Medicine for his discovery of the role played by pituitary hormones in regulating the amount of blood sugar (glucose) in animals. He is the first Latin American Nobel laureate in the sciences. He shared the prize with Carl Ferdinand Cori and Gerty Cori, who won for their discoveries regarding the role of glucose in carbohydrate metabolism). 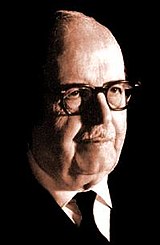 Bernardo Houssay has no quotes at this time.