Dame Beryl Margaret Bainbridge DBE (21 November 1932 – 2 July 2010) was an English writer from Liverpool. She was primarily known for her works of psychological fiction, often macabre tales set among the English working classes. Bainbridge won the Whitbread Awards prize for best novel in 1977 and 1996; she was nominated five times for the Booker Prize. She was described in 2007 as "a national treasure". In 2008, The Times named Bainbridge on their list of "The 50 greatest British writers since 1945". 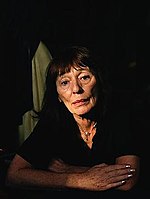 Beryl Bainbridge has no quotes at this time.