William McIntosh Davies (born 31 May 1964) is a Scottish former professional footballer and manager. He won the 2007 Playoffs with Derby County, finished as runners-up in 2005 with Preston North End, and reached the semi-finals in 2006 (Preston), 2010 and 2011 (both with Nottingham Forest). He also jointly (with Chris Hughton) holds the record for the most Football League Championship Manager of the Month awards having won two each at Preston and Derby and three at Nottingham Forest. 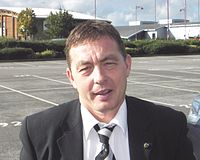 Billy Davies has no quotes at this time.