Douglas Bradford "Brad" Park (born July 6, 1948) is a retired Canadian professional ice hockey player. A defenceman, Park played in the National Hockey League (NHL) for the New York Rangers, Boston Bruins and Detroit Red Wings. Considered one of the best defencemen of his generation, and named to the all-star team several times, the best years of his career were overshadowed by superstar Bobby Orr, whom he would briefly play with. He is a member of the Hockey Hall of Fame. On January 27, 2017, in a ceremony during the All-Star Weekend in Los Angeles, Park was part of the second group of players to be named one of the '100 Greatest NHL Players' in history. 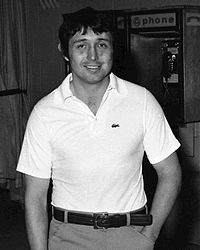 Brad Park has no quotes at this time.