Brendan Bayliss (born August 11, 1976 in Annapolis, MD) is an American musician, the founder, a lead guitarist alongside fellow guitarist and band member Jake Cinninger, and primary vocalist for progressive rock band Umphrey's McGee. He formed the band in 1997 and took its moniker from the name of a distant relative he met at a wedding named Humphries McGee. "My father’s aunt’s sister’s son’s kid," says Bayliss. "He’s just a nice guy. Lives on a farm, I think." Bayliss is one of the band's main songwriters. 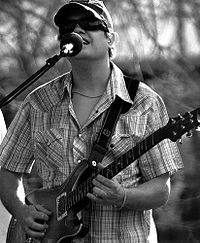 Brendan Bayliss has no quotes at this time.