Bulat Shalvovich Okudzhava (Russian: ?????? ????????? ?????????; Georgian: ????? ???????) (May 9, 1924 – June 12, 1997) was a Soviet poet, writer, musician, novelist, and singer-songwriter of Georgian-Armenian ancestry. He was one of the founders of the Soviet genre called "author song" (????????? ?????, avtorskaya pesnya), or "guitar song", and the author of about 200 songs, set to his own poetry. His songs are a mixture of Russian poetic and folksong traditions and the French chansonnier style represented by such contemporaries of Okudzhava as Georges Brassens. Though his songs were never overtly political (in contrast to those of some of his fellow Soviet bards), the freshness and independence of Okudzhava's artistic voice presented a subtle challenge to Soviet cultural authorities, who were thus hesitant for many years to give official recognition to Okudzhava. 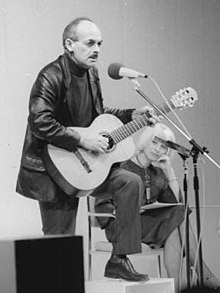 Bulat Okudzhava has no quotes at this time.