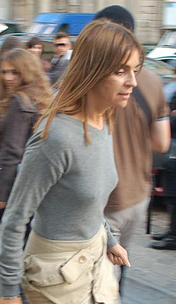 Carine Roitfeld (French pronunciation: ?[ka.?in ?wat.f?ld]; born 19 September 1954) is the former editor-in-chief of Vogue Paris, a position she held from 2001 to 31 January 2011. A former fashion model and writer, she announced her resignation on 17 December 2010 and was succeeded by Emmanuelle Alt. In 2012, she became founder and editor-in-chief of CR Fashion Book.

I think that each woman, whatever age, needs to recognize something good in her body. Someone has be ...

To see yourself on the big screen, you're big, you hate your voice, your vocabulary. You say the sam ...

I think it's less common in France that a man at the age of 50 buys a Porsche and gets a young girlf ...

Becoming a grandmother brought me back to the things I forgot to love. Nature. Playing. Seeing anima ...

I keep my old friends, and get older with them, but push young. It's good to be surrounded by kids, ...

We are very luck to be women, so even if we're wearing trousers, I always wear them with some lace u ...

In Japan, you can learn how to make a bunch of flowers. This is an art. Tea ceremony, it's an art.

London Fashion Week isn't the most organised, but I don't mind that. It's such an exciting place - i ...

I'm so tired of this vision of fashion of a diva with a big ego, and you think of big dark glasses t ...

You can't put yourself into competition with a magazine like 'Vogue.' You have to create something n ...

I am very surprised by someone like Alexander Wang. I am amazed how he is good with fashion, with bu ...

When you go to a show, Americans in New York are very proper, much more so than the French. Everythi ...

When I was young, no one got married. Now, all the young people, they want to get married, they want ...

When I was a little girl, my mother tried to make me dance, but I did not like it then.