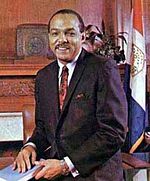 “My style will be management by being on the street, management by walking around. Third persons won't have to tell me what's going on in our city. I'll hear it, I'll see it, I'll touch it myself.”

“Despite the litany of the sorrows of the city, we must believe in the ability of man to respond to the problems of his environment.”

“It's really about schools and education. It really is about being America's safest city. I think that race is always bubbling somewhere and sometimes it does surface, but I don't think that the majority of the voters are going to pick a mayor or a candidate based solely on race.”

“[W]hen you realize that people have that sort of feeling about you, that you're going to be some sort of savior from their dilemma, it's very sobering, because it imposes a great responsibility upon you.”

“What has been happening the last four years in City Hall is that they have been closing recreation centers, closing libraries. We have not looked after our children in City Hall.”

“I knew my own situation, my own town, and I knew I had it in my hand. Once I got it, I knew I could do things that no civil rights march ever did.”

“There is nothing fundamentally wrong with America's cities that money can't cure.”