Carlos Ponce (born September 4, 1972) is a Puerto Rican actor, singer, composer and television personality. Ponce began his acting career by participating in Spanish language soap operas for Televisa and Telemundo. Ponce continued to expand his acting career by participating in various American television series. He did not limit himself solely to a career in television. Ponce, who is also a singer, is also active in the American movie industry as a character actor. 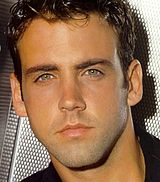 I'd say it's even harder to cater to Hispanics than to the lesbian or gay community. We're so culturally separated: Puerto Ricans, Dominicans, Mexicans, Venezuelans. We're all so different.

I can't live without a sense of humor. I need to be laughing and entertained at all times.

I would love to continue working on animated films. Yeah, those are my ambitions. No doubt.