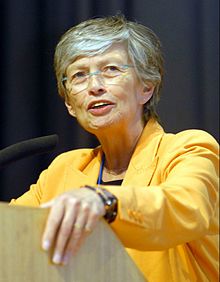 Carol Bellamy (born January 14, 1942) is the Chair of the Board of the Global Community Engagement and Resilience Fund (GCERF). Previously, she was Director of the Peace Corps, Executive Director of the United Nations Children's Fund (UNICEF), and President and CEO of World Learning. After three terms in the New York State Senate, she was the first woman to be elected as President of the New York City Council, a position she held until her unsuccessful bid for Mayor of New York in 1985; she was the second to last person to hold this position.

We must ensure that while eliminating child labor in the export industry, we are also eliminating th ...

New legislation has just been adopted by the International Labour Organization on the Worst Forms of ...

For example, UNICEF works with governments to change legislation such as in India where a law was pa ...

Corporate partners help UNICEF fund our programmes for children, advocate with us on their behalf, o ...

While the technology revolution has yet to reach far into the households of those in developing coun ...

Northern Uganda presents a situation of extraordinary violation of the rights of children.

UNICEF has repeatedly called on governments to ensure basic services for children and this includes ...

The real solution is to improve the incomes of the poor and provide their children with decent educa ...

And each of us can practice rights ourselves, treating each other without discrimination, respecting ...

Children have in the past and continue to influence policy makers.

And most importantly perhaps, children can learn about their rights, share their knowledge with the ...

It's estimated that there may be two hundred and fifty million children in the world engaged in some ...

The dream of the Convention was born from the that children and their needs were not been considered ...