Casey Sablowski (née Eastham; born 19 March 1989) is an Australian women's field hockey player. Sablowski plays as a midfielder. She made her debut for the Australia women's national hockey team, commonly referred to as the Hockeyroos, at age 17. Her Australian Hockey League (AHL) team is the New South Wales Arrows. Sablowski was a talented junior player; she was selected into the Australian under-21s team to compete in the Junior World Cup in 2005 at the age of 16. At this tournament she was named one of the best players for the under-21s age group in the world. 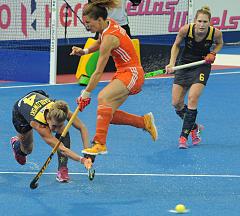 Unfortunately, there are not many people in the world who get to experience the Olympic Games.

I still feel like the same girl who grew up in Albion Park. I'm such a family girl. I haven't changed.

Hockey should have some appeal. It's a good game in that is full of action, very quick, and it can be high-scoring.

My grandfather's death was really hard to deal with.

I always wanted to be known as the girl who was good at hockey rather than the girl you see in magazines.