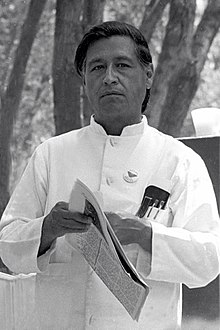 Cesar Chavez (born César Estrada Chávez, locally: [?sesa? es?t?aða ?t?a?es]; March 31, 1927 – April 23, 1993) was an American labor leader and civil rights activist who, with Dolores Huerta, co-founded the National Farm Workers Association (later the United Farm Workers union, UFW) in 1962. Originally a Mexican American farm worker, Chavez became the best known Latino American civil rights activist, and was strongly promoted by the American labor movement, which was eager to enroll Hispanic members. His public-relations approach to unionism and aggressive but nonviolent tactics made the farm workers' struggle a moral cause with nationwide support. By the late 1970s, his tactics had forced growers to recognize the UFW as the bargaining agent for 50,000 field workers in California and Florida. However, by the mid-1980s membership in the UFW had dwindled to around 15,000.

If you really want to make a friend, go to someone's house and eat with him... the people who give y ...

Once social change begins, it cannot be reversed. You cannot un-educate the person who has learned t ...

I became a vegetarian after realizing that animals feel afraid, cold, hungry and unhappy like we do. ...

Kindness and compassion towards all living things is a mark of a civilized society. Conversely, crue ...

If you are interested in preventing animal suffering, the first thing you should give up is eggs and ...

Only when we have become nonviolent towards all life will we have learned to live well with others.

A symbol is an important thing. That is why we chose an Aztec eagle. It gives pride...When people se ...

Kindness and compassion toward all living things is the mark of a civilized society.

In the no-nonsense school of adversity, which we did not choose for ourselves, we are learning how t ...

Imagine the National Guard being called against a group of peaceful people. How far can we get; how ...

If you give yourself totally to the nonviolence struggle for peace and justice you also find that pe ...

Self dedication is a spiritual experience.

I am convinced that the truest act of courage, the strongest act of manliness, is to sacrifice ourse ...

The first principle of non-violent action is that of non-cooperation with everything humiliating.

The non-violent technique does not depend for its success on the goodwill of the oppressor, but rath ...