Charles A. Graner, Jr., (born 1968) is a former member of the U.S. Army reserve who was convicted of prisoner abuse in connection with the 2003–2004 Abu Ghraib prisoner abuse scandal. Graner, with other soldiers from his unit, the 372nd Military Police Company, was accused of allowing and inflicting sexual, physical, and psychological abuse of Iraqi prisoners of war in Abu Ghraib Prison, a notorious prison in Baghdad during the United States' occupation of Iraq. 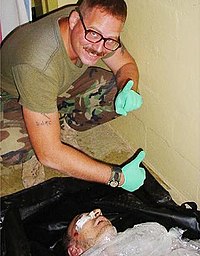 “Frederick said this is what MI (military intelligence) wanted him to do.”

“The prisoner was not injured, so I believe I did nothing wrong.”

#Believe #Injured #Not #Nothing #Prisoner #Wrong

The Christian in me says it's wrong, but the corrections officer in me says, 'I love to make a grown man piss himself.'