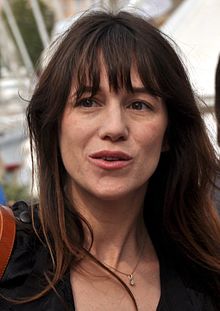 Charlotte Lucy Gainsbourg (born 21 July 1971) is a British-French actress and singer. She is the daughter of English actress Jane Birkin and French singer and songwriter Serge Gainsbourg. After making her musical debut with her father on the song "Lemon Incest" at the age of 12, she released an album with her father at the age of 15. More than 20 years passed before she released three albums as an adult (5:55, IRM and Stage Whisper) to commercial and critical success. Gainsbourg has also appeared in many films, including several directed by Lars von Trier, and has received both a César Award and the Cannes Film Festival Best Actress Award.

Girls can wear jeans, cut their hair short, wear shirts and boots, 'cause it's okay to be a boy, but ...

Wanting to do it was much more powerful than the fright.

You think that being a girl is degrading, but secretly, you'd love to know what it's like, wouldn't ...

I found it very difficult to explain to someone why you did a film. It's not like having a conversat ...

I wasn't getting the responses I hoped for. You can't protect yourself from other judgments.

Style for me is a casual way of putting something on. It's not thought out but needs to suit your wa ...

The English was really my mother, it was never me. Being the daughter of my father, I always felt ve ...

In France I'm very private, I don't like talking about my life, and I imagined that people would thi ...

I used to hate being recognised.

It's nice that we have all these different films.

When you love someone, you don't want them to suffer at all.

The more you turn down things, the more difficult it becomes to feel that the next one will be right ...

At the beginning it wasn't to do with the work, it was more the experience.

Letting go of things and not being afraid of being ridiculous or over the top - I think that's the m ...