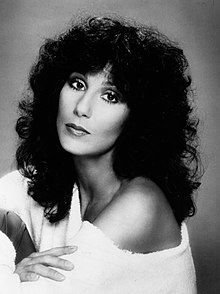 Cher (/????r/; born Cherilyn Sarkisian; May 20, 1946) is an American singer and actress. Described as embodying female autonomy in a male-dominated industry, she is known for her distinctive contralto singing voice and for having worked in numerous areas of entertainment, as well as adopting a variety of styles and appearances during her five-decade-long career, which has led to her being nicknamed the Goddess of Pop.

People are negative no matter what you do.

I keep coming back because I have no place else to go. What else would I do? I love to sing.

Women have to harness their power - its absolutely true. It's just learning not to take the first no ...

I've been famous my entire life; I don't know any other way.

I'm scared to death of being poor. It's like a fat girl who loses 500 pounds but is always fat insid ...

I think I am a product of my mother's sensibilities and my mother's values. There has been lots of b ...

I have a problem with religion that makes it so, like, 'We are the ones. We are the chosen ones.'

A girl can wait for the right man to come along but in the meantime that doesn't mean she can't have ...

I've been screaming at the top of my lungs at my family, 'Work out! Work out! Old age is coming!'

I don't know what else I would be if I wasn't me. I am not looking from the outside, looking back. I ...

Women are the architects of society

Men are a luxury, not a necessity.