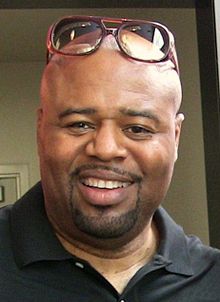 Kenneth "Chi" McBride (born September 23, 1961) is an American actor. He starred as high school principal Steven Harper on the series Boston Public, Emerson Cod on Pushing Daisies, Detective Laverne Winston on the Fox drama Human Target, and more recently Detective Don Owen in the short-lived CBS crime drama Golden Boy. He currently plays in a main role as Captain Lou Grover of the Five-0 taskforce in the CBS drama Hawaii Five-0. He has also appeared in films such as Gone in 60 Seconds, The Terminal, I, Robot, Roll Bounce, and Draft Day.

Teachers are out there with a very difficult job, which they pursue with tireless dedication.

I was working at a phone company. I got tired of my life and wanted to change it, so I did

Let's be real: It's just TV; it's just entertainment.

I had spent many years before I was 31 hearing people tell me, Oh Man, you're so funny, you need to ...

Someone said to me today, 'Everybody loved PUSING DAISIES,' I said, 'No, they didn't' that's why I'm ...

It is a different genre - a show about something other than doctors, lawyers and cops. Teachers are ...

In movies, I have had the opportunity of working with some of the people that I respect very much

There is a lot going on in high schools, and I think what we portray is fairly accurate

If you look hard enough, you can find race issues and racism in everything. I know people who say, ' ...