Charles (Chip) Pashayan, Jr. (born March 27, 1941) served as a Republican Congressman from the Fresno area in California's Central Valley from 1979 to 1991. He won his first term in 1978, when he upset two-term incumbent Democrat John Hans Krebs by a 54% to 46% margin. He represented his largely rural, conservative district until 1990, when he was defeated for reelection by Democrat Cal Dooley. He is of Armenian descent. 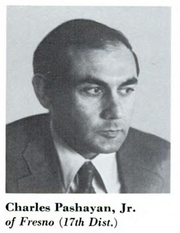 All of this has to be understood as part of a process leading ultimately to a treaty that will give an international body power over our domestic laws.