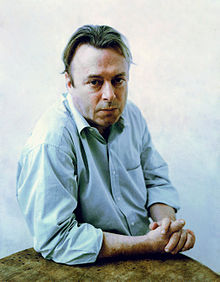 Christopher Eric Hitchens (13 April 1949 – 15 December 2011) was an English author, columnist, essayist, orator, religious and literary critic, social critic, and journalist. He contributed to New Statesman, The Nation, The Atlantic, London Review of Books, The Times Literary Supplement, Slate, Free Inquiry and Vanity Fair. Hitchens was the author, co-author, editor or co-editor of over 30 books, including five collections of essays, on politics, literature and religion. A staple of public discourse, his confrontational style of debate made him both a lauded public intellectual and as a controversial figure to the American Christian right wing.

Religion is part of the human make-up. It's also part of our cultural and intellectual history. Reli ...

Owners of dogs will have noticed that, if you provide them with food and water and shelter and affec ...

When I meet people who say - which they do all of the time - 'I must just tell you, my great aunt ha ...

Like the experience of warfare, the endurance of grave or terminal illness involves long periods of ...

I don't think Romney is wacky at all, but religion makes intelligent people say and do wacky things, ...

Many parents and teachers have become irritated to the point of distraction at the way the weed-styl ...

I'm afraid the SS's relationship with the Catholic Church is something the Church still has to deal ...

Even if I accepted that Jesus - like almost every other prophet on record - was born of a virgin, I ...

WASP' is the only ethnic term that is in fact a term of class, apart from redneck, which is another ...

A lot of people, because of my contempt for the false consolations of religion, think of me as a sym ...

My children, to the extent that they have found religion, have found it from me, in that I insist on ...

There are people who cannot forget, as neither do I, the lesson of the years of the Indochina War. W ...

I make preparations both to live and to die every day, but with the emphasis on not dying, and on ac ...

Millions of people die every day. Everyone's got to go sometime. I've came by this particular tumor ...