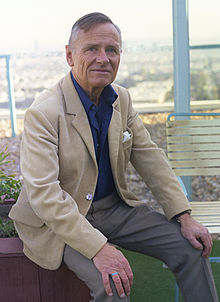 Christopher William Bradshaw Isherwood (26 August 1904 – 4 January 1986) was an English-American novelist. His best-known works include The Berlin Stories (1935-39), two semi-autobiographical novellas inspired by Isherwood's time in Weimar Republic Germany that were adapted into the acclaimed film Cabaret (1972); and his 1964 novel A Single Man.

In order to get the worst possible first impression of Los Angeles one should arrive there by bus, p ...

George smiles to himself, with entire self-satisfaction. Yes, I am crazy, he thinks. That is my secr ...

It seems to me that the real clue to your sexual orientation lies in your romantic feelings rather t ...

Lois and Alexander are by far the most beautiful creatures in the class; their beauty is like the be ...

The prefect evening...lying down on the couch beside the bookcase and reading himself sleepy...Jim l ...

I am a camera with its shutter open, quite passive, recording, not thinking. Recording the man shavi ...

The Nazis were not right to hate the Jews. But their hating of Jews was not without a cause. No one ...

Only those who are capable of silliness can be called truly intelligent.

I seldom try to probe the mystery of my sloth. I have squandered a gigantic fortune of work hours... ...

The talk of pale, burning-eyed students, anarchists and utopians all, over tea and cigarettes in a l ...

We must remember that nothing in this world really belongs to us. At best, we are merely borrowers.

Bad writing is bad not just because the language is humdrum, but the quality of the observation is s ...

The Quito telephone service is about as reliable as roulette.