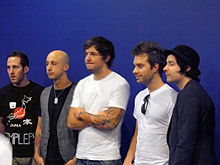 Charles-André "Chuck" Comeau (born 17 September 1979) is a Canadian musician and drummer, best known for being the drummer of the rock band Simple Plan. He also founded the apparel company Role Model Clothing along with his bandmate Pierre Bouvier and the band's best friend, Patrick Langlois. He is also former drummer for the punk rock band Reset from 1993 to 1999, which he quit to form Simple Plan with his Reset bandmate who also left Reset, Pierre Bouvier.

We've always had a lot of different influences and we've always liked catchy music from the Beatles ...

Simple Plan`s trademark is pretty easy. By the time the song ends, you can sing it. It doesn't take ...

Sometimes you just have to sit down a lot and make sure everyone's cool. If someone has an issue, yo ...

We grew up with all the Fat Wreck Records and all the Epitaph bands, that era. We mixed it up togeth ...

We just wanted to make albums where every song stands out and is different. It must not be the same ...

“Rancid are real punk-rock dudes, you know, but they came out with the opposite attitude,”

“Truthfully, ... obviously good music and a good live show is important, and you have to make sure ...

“We've been very fortunate not to be a 'firecracker band' that blows up and goes away.”

“A lot of bands talk shit about us.”

“People thought I was crazy, but it turned out to be the best thing that could have happened, ... ...

“They came to watch us every night, and we became good friends. They'd come to our shows in San Fr ...

It's always been about the songs for us. It doesn't matter about all the image stuff. We're really a ...

I think the big thing for Simple Plan is that we were able to keep the band members, the same five g ...