Clayton Moore (September 14, 1914 – December 28, 1999) was an American actor best known for playing the fictional western character the Lone Ranger from 1949–1951 and 1954–1957 on the television series of the same name and two related movies from the same producers. 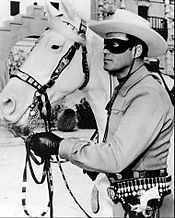 I think you're going to find out that westerns will be coming back. It's Americana, it's part of our history, the cowboy, the cattle drive, the sheriff, the fight for law, order and justice. Justice will always prevail as far as I'm concerned.

#Coming Back #Cowboy #Law And Order

Once I got the Lone Ranger role, I didn't want any other.

“I am a fighter. I believe in that which is right, and the truth is, I have been the Lone Ranger for the past thirty years and I will not give up the fight. I love my public and I'll fight for you. I'll continue to make personal appearances for my thousands of fans.”

#Believe #Fighter #Give #Lone #Truth #Up #Will

“I often meet adults in their 30s, 40s, or 50s who, as soon as they recognize me, suddenly become six years old again.”

I will continue wearing the white hat and black mask until I ride up into the big ranch in the sky.