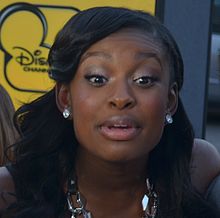 Courtney "Coco" Jones (born January 4, 1998) is an American singer, songwriter and actress. She was born in Columbia, South Carolina, but raised in Lebanon, Tennessee. Jones rose to prominence starring in the Disney Channel film, Let It Shine. Jones was featured on Radio Disney's Next Big Thing, or N.B.T.. Jones was formerly signed with Hollywood Records, Jones released her debut single "Holla at the DJ," followed by her extended play, Made Of.

I read a lot of summaries about the story [ based on the Cyrano de Bergerac. ]. I also watched Roxan ...

Signing with Hollywood Records was a dream come true. I am so blessed to get to do the things that I ...

I listen to Glee songs a lot. I like their rendition of "Bust the Window Out Your Car."

The main message of this movie [Let It Shine] that everyone will take away is to believe in yourself ...

I am so laid back that, honestly, I'm in jeans and sweats a lot of the time. I like Aeropostale and ...

Determination. You have to be willing to put in the extra time and the extra practice to be the best ...

Performing of any kind: singing, acting, dancing. I also get really excited during interviews.

Singing, dancing, and acting! The part [of Roxie in Let It Shine] was right up my alley. Plus, the t ...

My worst decision was not learning Spanish yet. I think it would really help my business if I could ...

No matter what responses you get from your work, you have to be determined not to give up on your dr ...

I like to cook Shrimp Alfredo. It's also my favorite dish to eat!

I have a great family that loves me, a record deal at 14, and I get to do what I love every day.

My daddy. He's so funny! My whole family jokes around a lot.

I have read some great books recently: "Heaven is For Real," "Bud Not Buddy," and my favorite, "Tige ...

I would have to say the best was when my mom formed a company for me. I write out all of the checks ...