Sir Colin Brian Blakemore, FRS, FMedSci, FRSB, FBPhS (born 1 June 1944), is a British neurobiologist, specialising in vision and the development of the brain, who is Professor of Neuroscience and Philosophy in the School of Advanced Study, University of London and Emeritus Professor of Neuroscience at the University of Oxford. He was formerly Chief Executive of the British Medical Research Council (MRC). He is best known to the public as a communicator of science but also as the target of a long-running animal rights campaign. According to The Observer, he has been both "one of the most powerful scientists in the UK" and "a hate figure for the animal rights movement". 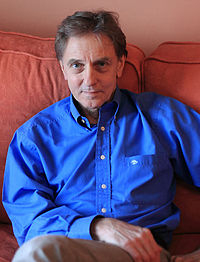 [monkeys] are used only when no other species and no alternatice approach can provide the answers to questions about such conditions as Alzhemers, stroke, Parkinson's, spinal injury, hormone disorders, and vaccines for HIV

The brain struggling to understand the brain is society trying to explain itself.

I see worries in the fact that we have the power to manipulate genes in ways that would be improbable or impossible through conventional evolution. We shouldn't be complacent in thinking that we can predict the results.

The painter who strives to represent reality must transcend his own perception. He must ignore or override the very mechanismsin his mInd that create objects out of images(symbols)... The artist, like the eye, must provide true images and the clues of distance to tell his magic lies.

If the cells and fibres in one human brain were all stretched out end to end, they would certainly reach to the moon and back. Yet the fact that they are not arranged end to end enabled man to go there himself. The astonishing tangle within our heads makes us what we are.