Colin Murray Cowherd (born January 6, 1964) is an American sports media personality. Cowherd began his broadcasting career as sports director of Las Vegas television station KVBC, and as a sports anchor on several other stations before joining ESPN in 2003, where he hosted a radio show on the ESPN Radio network, and also became one of the original hosts of ESPN's television program SportsNation, as well as Colin's New Football Show. Cowherd is the host of The Herd with Colin Cowherd on Fox Sports Radio and Fox Sports 1. The Herd is one of FS1's Top Grossing Shows and arguably the most controversial. He is also a host of Speak For Yourself - also on FS1. 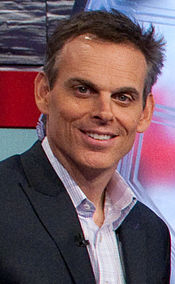 I just don't think the Bob Costas, Joe Buck - I don't think that the people that rise to the highest - Jim Nantz, Mike Tirico - need a schtick. I just think Brent Musburger is really good.

I'm so tired of people who can't be honest. "Beauty is on the inside" Really?? Then why do rich guys & successful guys always end up with beautiful women but they have lousy personalities?.

Don't let people with no life ruin yours.

I never tell the audience what to think of me. When I talk, how you consume it is up to you.