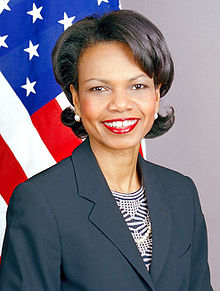 Condoleezza "Condi" Rice (/?k?nd??li?z? ra?s/; born November 14, 1954) is an American political scientist and diplomat. She served as the 66th United States Secretary of State, the second person to hold that office in the administration of President George W. Bush. Rice was the first female African-American Secretary of State, as well as the second African-American Secretary of State (after Colin Powell), and the second female Secretary of State (after Madeleine Albright). Rice was President Bush's National Security Advisor during his first term, making her the first woman to serve in that position. Before joining the Bush administration, she was a professor of political science at Stanford University, where she served as provost from 1993 to 1999. Rice also served on the National Security Council as the Soviet and Eastern Europe Affairs Advisor to President George H. W. Bush during the dissolution of the Soviet Union and German reunification.

It has been, after all, 11 years, more than a decade now, of defiance of U.N. resolutions by Saddam ...

I don't think anybody can take the word of Saddam Hussein and his regime, and certainly an American ...

But I want to just caution, it is not incumbent on the United States to prove that Saddam Hussein is ...

I didn't run for student council president. I don't see myself in any way in elected office. I love ...

Well, there's been plenty of ultimatums, and one thing that we better be very clear is that we can't ...

Now, al Qaeda's on the run. Afghanistan is no longer a base of operations. The Afghan government is ...

It is high time that the international community tell Saddam Hussein and his regime that this is not ...

For the United States, supporting international development is more than just an expression of our c ...

I was born in segregated Birmingham, Alabama. I didn't have a white classmate till we moved to Denve ...

I'm saying there is no way that I will do this, because it's really not me. I know my strengths, and ...

America cannot do most of what needs to be done alone. You need friends. And we have good friends ar ...

Every good leader is part manager and every good manager is part leader.

I find that the great majority of public servants across the entire political spectrum come because ...