James Thomas "Cool Papa" Bell (May 17, 1903 – March 7, 1991) was an American center fielder in Negro league baseball from 1922 to 1946. He is considered by many baseball observers to have been one of the fastest men ever to play the game. Stories demonstrating Bell's speed are still widely circulated. He was elected to the Baseball Hall of Fame in 1974. He ranked 66th on a list of the greatest baseball players published by The Sporting News in 1999. 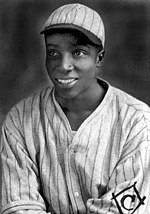 Because of baseball I smelled the rose of life. I wanted to travel, and to have nice clothes. Baseball allowed me to do all those things, and most important, during my time with the Crawfords, it allowed me to become a member of the brotherhood of friendship which will last forever.

They used to say, 'If we find a good black player, we'll sign him.' They was lying.

I remember one game I got five hits and stole five bases, but none of it was written down because they didn't bring the scorebook to the game that day.