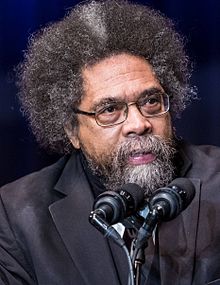 Cornel Ronald West (born June 2, 1953) is an American philosopher, political activist, social critic, author, public intellectual, and prominent member of the Democratic Socialists of America. West is an outspoken voice in American leftist politics, and as such has been critical of many center-left figures, including President Barack Obama and former Secretary of State and 2016 Democratic Presidential nominee Hillary Clinton. He has held professorships at Harvard University, Princeton University, Yale University, Union Theological Seminary, and the University of Paris during his career. He is also a frequent commentator on politics and social issues in many media outlets.

My dear brother Barack Obama has a certain fear of free black men. As a young brother who grows up i ...

Racism is a moral catastrophe, most graphically seen in the prison industrial complex and targeted p ...

We will not allow this day of the Martin Luther King, Jr. Memorial to go without somebody going to j ...

We want to bear witness today that we know the relation between corporate greed and what goes on too ...

I think the important thing to understand first and foremost about Michael Jackson is that he was th ...

Larry Summers, I think, he had a long history of arrogance and relative ignorance about poor people' ...

I always felt called to serve, to empower and ennoble as many people as I could, teaching, truth-tel ...

I am excited to have a black president because white supremacy is real and it needs to be shattered.

Frederick Douglas's agenda was an agenda, not for black people to get out of slavery. It was for Ame ...

I'm not saying that President Obama should be exempt from criticism, nor do I believe it is some act ...

We need to put strong Democratic pressure on President Obama in the name of poor and working people.

The conversation with the dead is one of the great pleasures of life. Somebody who is sitting readin ...

Love and trust and justice, concern for the poor, that's being pushed to the margins, and you can se ...