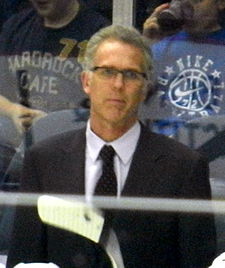 Craig MacTavish (born August 15, 1958) is a Canadian professional ice hockey executive and former player. He is the current Vice President of Hockey Operations for the Edmonton Oilers, and has also served as the team's head coach and general manager. He played centre for 17 seasons in the National Hockey League with the Boston Bruins, Edmonton Oilers, New York Rangers, Philadelphia Flyers and St. Louis Blues, winning the Stanley Cup four times (1987, 1988, 1990, 1994). MacTavish later coached the Oilers from 2000 to 2009 and also served as assistant coach with the Rangers and Oilers. He is notable as the last NHL player to not wear a helmet during games.

“For the first time, I think I've got a good idea who I'm starting right now.”

“You're definitely not going to intimidate him, that's for sure. He won't be dissuaded to go the a ...

“We want them integrated into their off-ice program and give them a little sense of the NHL withou ...

“We have to play a much more intelligent game then what we played the last three games. We've been ...

“(The loss is) hard to slough off. It's going to linger for a while. Given any other circumstances ...

“The ceremony itself was inspiring. But it was a debacle from the outset.”

“We made mistake after mistake with the puck. They exposed a lot of the weakness on our team.”

“All of the areas of the game that looked weak for us before were strong. Our goaltender was great ...

“I'm really happy about the way we've responded to adversity. They showed some composure by not th ...

“You get tired of being viewed as the perfect opponent. I wondered why they would say that, becaus ...

“There has to be a change in that rule. The puck was going in the net anyway. The video replay off ...

“There has got to be a change in that rule. The puck is going into the net anyway, the net coming ...

“I don't know how serious the injury is, but we prefer him watching the game rather than playing, ...