Montgomery Gentry is an American country music duo composed of vocalists Eddie Montgomery and Troy Gentry, both natives of Kentucky. The two began performing in the 1990s as part of two different bands with Montgomery's brother, John Michael Montgomery. Although Gentry won a talent contest in 1994, he reunited with Eddie Montgomery after Gentry was unable to find a solo record deal, and Montgomery Gentry was formed in 1999. The duo is known for its Southern rock influences, and has collaborated with Charlie Daniels, Toby Keith, Five for Fighting, and members of The Allman Brothers Band. 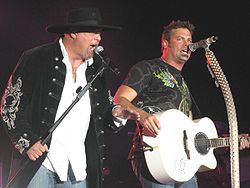 Eddie Montgomery has no image quotes at this time.