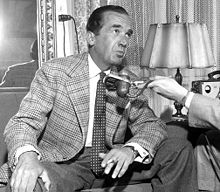 Edward R. Murrow KBE (born Egbert Roscoe Murrow; April 25, 1908 – April 27, 1965) was an American broadcast journalist. He was generally referred to as Ed Murrow. He first came to prominence with a series of radio broadcasts for the news division of the Columbia Broadcasting System during World War II, which were followed by millions of listeners in the United States. During the war he assembled a team of foreign correspondents who came to be known as the Murrow Boys.

The speed of communications is wondrous to behold. It is also true that speed can multiply the distr ...

A nation of sheep will beget a government of wolves.

Most truths are so naked that people feel sorry for them and cover them up, at least a little bit.

We have currently a built-in allergy to unpleasant or disturbing information. Our mass media reflect ...

We must not confuse dissent with disloyalty. We must remember always that accusation is not proof an ...

All I can hope to teach my son is to tell the truth and fear no man.

To be credible we must be truthful.

We must not confuse dissent with disloyalty.

American traditions and the American ethic require us to be truthful, but the most important reason ...

It appeared that most of the men and boys had died of starvation; they had not been executed. But th ...

Speaking of Sir Winston Churchill: He mobilized the English language and sent it into battle.

Of this be wary. Honor and fame are often regarded as interchangeable. Both involve an appraisal of ...

The politician is . . . trained in the art of inexactitude. His words tend to be blunt or rounded, b ...