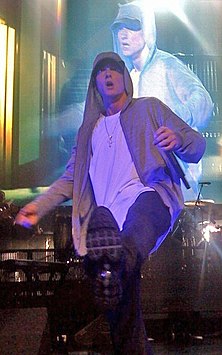 Marshall Bruce Mathers III (born October 17, 1972), known professionally as Eminem (often stylized as EMIN?M), is an American rapper, record producer, and actor. Eminem is the best-selling artist of the 2000s in the United States. Throughout his career, he has had 10 number-one albums on the Billboard 200 and five number-one singles on the Billboard Hot 100. With US sales of 45.1 million albums and 42 million tracks as of June 2014, Eminem is the second best-selling male artist of the Nielsen SoundScan era, the sixth best-selling artist in the United States and the best-selling hip-hop artist. Globally, he has sold more than 172 million albums, thus being one of the world's best-selling artists. Rolling Stone ranked him 83rd on its list of 100 Greatest Artists of All Time, calling him the King of Hip Hop.

The truth is you don't know what is going to happen tomorrow. Life is a crazy ride, and nothing is g ...

Trust is hard to come by. That's why my circle is small and tight. I'm kind of funny about making ne ...

Honestly, I'd love to be remembered as one of the best to ever pick up a mic, but if I'm doing my pa ...

Ultimately, who you choose to be in a relationship with and what you do in your bedroom is your busi ...

The details surrounding both my marriage and subsequent filing for divorce are private, and I had ho ...

Being a student of hip-hop in general, you take technical aspects from places. You may take a rhyme ...

Music is so therapeutic for me that if I can't get it out, I start feeling bad about myself - a lot ...

I felt like I had a really bad case of writer's block... Music is so therapeutic for me that if I ca ...

I need drama in my life to keep making music.

Hip-hop saved my life, man. It's the only thing I've ever been even decent at. I don't know how to d ...

When you're a little kid, you don't see color, and the fact that my friends were black never crossed ...

I always say this about my music, and music in general: Music is like a time capsule. Each album ref ...

There was certainly, like, a rebellious, like, youthful rage in me. And there was also the fact of n ...

Yeah, I did see where the people dissing me were coming from. But, it's like, anything that happened ...

Sometimes I even cut myself to see how much it bleeds It's like adrenaline, the pain is such a sudde ...