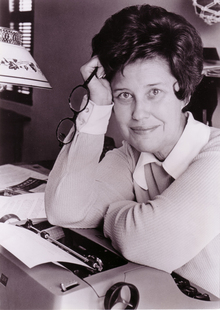 Erma Louise Bombeck (née Fiste; February 21, 1927 – April 22, 1996) was an American humorist who achieved great popularity for her newspaper column that described suburban home life from the mid-1960s until the late 1990s. Bombeck also published 15 books, most of which became bestsellers. From 1965 to 1996, Erma Bombeck wrote over 4,000 newspaper columns, using broad and sometimes eloquent humor, chronicling the ordinary life of a midwestern suburban housewife. By the 1970s, her columns were read twice-weekly by 30 million readers of the 900 newspapers in the U.S. and Canada.

When I stand before God at the end of my life, I would hope that I would not have a single bit of ta ...

When your mother asks, 'Do you want a piece of advice?' it is a mere formality. It doesn't matter if ...

Dreams have only one owner at a time. That's why dreamers are lonely.

There is a thin line that separates laughter and pain, comedy and tragedy, humor and hurt.

Do you know what you call those who use towels and never wash them, eat meals and never do the dishe ...

Guilt: the gift that keeps on giving.

Never go to a doctor whose office plants have died.

Don't confuse fame with success. Madonna is one; Helen Keller is the other.

There's nothing sadder in this world than to awake Christmas morning and not be a child.

When humor goes, there goes civilization.

For years my wedding ring has done its job. It has led me not into temptation. It has reminded my hu ...

Never go to your high school reunion pregnant or they will think that is all you have done since you ...

Who in their infinite wisdom decreed that Little League uniforms be white? Certainly not a mother.

“For years [my wedding ring] has done its job. It has led me not into temptation. It has reminded ...