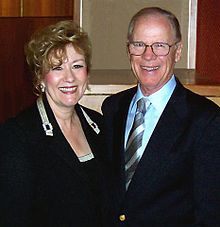 Esther Hicks (née Weaver, born March 5, 1948) is an American inspirational speaker and author. She has co-written nine books with her husband Jerry Hicks, presented numerous workshops on the law of attraction with Abraham Hicks Publications and appeared in the original version of the 2006 film The Secret. The Hicks' books, including the series The Law of Attraction, are — according to Esther Hicks — "translated from a group of non-physical entities called Abraham." Hicks describes what she is doing as tapping into "infinite intelligence".

Your natural instinct, from your broadest Nonphysical perspective, is to know your power. Fear is a ...

If you will relax and allow Law of Attraction to do the organization, the managing, then you can spe ...

If you examine your history, you cannot help but repeat it! Law of Attraction says it is so: 'Whatev ...

Volcanic ash will be experienced in all parts of your world, as the volcanoes around your earth are ...

The BEST representation of Source Energy that you will ever find in your physical format is inexpres ...

Someone who takes the time to understand their relationship with source, who actively seeks alignmen ...

If you know that all is well, you know all you need to know. And if you know life is supposed to be ...

There ain't no "baby mama drama" up in this Vortex, homie!

Abraham: You did not come into this environment to create through action. Instead, your action is me ...

Law of Attraction is Universal, and every person is affected by it. And it is always true that what ...

Always, when you know what you don't want, that's when the rocket of desire is born of what you do w ...