Faiz Ahmad Faiz (Punjabi, Urdu: ??? ???? ??? ?, born 13 February 1911 – 20 November 1984) MBE, NI, Lenin Peace Prize was a Pakistani intellectual, revolutionary poet, and one of the most celebrated writers of the Urdu language, having been nominated four times for the Nobel Prize for literature. Faiz also wrote poetry in the Punjabi language. A notable member of the Progressive Writers' Movement (PWM), Faiz was an avowed Marxist, and he received the Lenin Peace Prize by the Soviet Union in 1962. 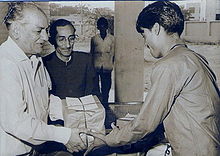 There are many other pleasures - besides the pleasure of physical union.

The true subject of poetry is the loss of the beloved.

The first rule of translation: make sure you know at least one of the bloody languages!