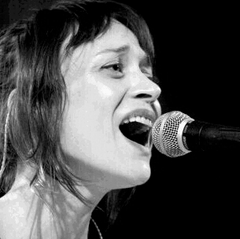 Fiona Apple McAfee-Maggart (born September 13, 1977) is an American singer-songwriter, pianist and record producer. Classically trained on piano as a child, Apple began composing her own songs when she was eight years old. Her debut album, Tidal, written when Apple was seventeen, was released in 1996 and received a Grammy Award for Best Female Rock Vocal Performance for the single "Criminal". She followed with When the Pawn... (1999), produced by Jon Brion, which was also critically and commercially successful and went certified platinum.

I got into therapy in the fifth grade because I said in a sarcastic way that I was going to kill mys ...

I don't go on lunch dates with friends. I hear about people having dinner parties, but I never do th ...

I can bake. I made myself some nice French fries once. But otherwise I just eat out. Lots of salad b ...

But I honestly don't read critics. My dad reads absolutely everything ever written about me. He call ...

And if I'm being honest, I don't think I have an ex-boyfriend who would have something mean to say a ...

Five years from now I'm probably going to look back on the things I'm doing and cringe.

If I have one success in my relationship history, it's with the people who listen to my music. I thi ...

The way I feel about music is that there is no right and wrong. Only true and false.

Men are my bread and butter. It's what I live for! I have no shame about that.

Sometimes interviews are fun and good conversations, but stuff like photo shoots and appearances at ...

I just tend to do things to myself that I don't realize I'm doing. Sometimes I bite my lip so that i ...

I'm not a control freak.

I got a lot of problems, but I'm really good at intuiting what I need to do to be happy with whateve ...

I think I'm better at live shows than I used to be because I'm way more comfortable with the uncomfo ...