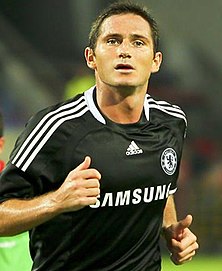 Frank James Lampard OBE (born 20 June 1978) is an English former professional footballer and children's writer. He is the all-time leading goalscorer for Chelsea, where he played for 13 years, and is considered by a number of journalists and football experts to be one of the greatest midfielders of his generation, in addition to being regarded as Chelsea's greatest ever player by some Chelsea players, such as previous record goal-scorer Bobby Tambling and long-term teammate John Terry.

Reading with my children is incredibly important to me and a wonderful way to spend time together as ...

Barcelona are my favourite team in Spain, let's put it that way.

I think about all my successes and failures, and sometimes the failures stick in your head as much a ...

I didn't want to be the rebel who was bottom of the class, so I worked hard. They wanted me to stay ...

I fancy our chances at the European Championships.

I loved reading Roald Dahl when I was young but I had forgotten a lot about the books. I read the 'B ...

My dad shaped the footballing side of me, and Mum shaped me as a person. I've always been very close ...

I think it was in Moscow last year and I got changed for training the day before we played Moscow, b ...

I think as far as kids go, you just have to work hard. Work on your skills, keep focused.

I'm a very private person, and you have a lot of people looking into your personal life, away from f ...

I'm happy here, and why change when you love the club and the club's in a really good position right ...

Even with the quality of players that we have, they're an extremely hard side to break down and once ...

Before my mother died, she told me not to leave Chelsea.

Training's completely different now. It used to be a lot of running and work without the ball. Now i ...