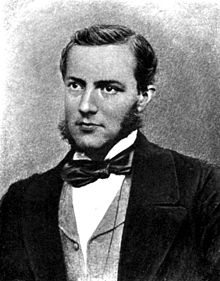 Friedrich Max Müller (6 December 1823 – 28 October 1900), generally known as Max Müller, was a German-born philologist and Orientalist, who lived and studied in Britain for most of his life. He was one of the founders of the western academic field of Indian studies and the discipline of comparative religion. Müller wrote both scholarly and popular works on the subject of Indology. The Sacred Books of the East, a 50-volume set of English translations, was prepared under his direction. He also promoted the idea of a Turanian family of languages and Turanian people.

“To me this technical acceptation seems not applicable here, where we have to deal with the simple ...

“He in whom a desire for the Ineffable has sprung up, who is satisfied in his mind, and whose thou ...

“He who does not rouse himself when it is time to rise, who, though young and strong, is full of s ...

“Cut out the love of self, like an autumn lotus, with thy hand!”

“He who takes refuge with Buddha, the Law, and the Church; he who, with clear understanding, sees ...

“He himself does not belong to himself; how much less sons and wealth?”

“The five troubles or evils of the mind are passion, anger, ignorance, arrogance, pride,to anythin ...

“His thought is quiet, quiet are his word and deed, when he has obtained freedom by true knowledge ...

“Pleasant is attainment of intelligence, pleasant is avoiding of sins.”

“He who possesses virtue and intelligence, who is just, speaks the truth, and does what is his own ...

“Beware of bodily anger, and control thy body!”