George Ledyard Stebbins Jr. (January 6, 1906 – January 19, 2000) was an American botanist and geneticist who is widely regarded as one of the leading evolutionary biologists of the 20th century. Stebbins received his Ph.D. in botany from Harvard University in 1931. He went on to the University of California, Berkeley, where his work with E. B. Babcock on the genetic evolution of plant species, and his association with a group of evolutionary biologists known as the Bay Area Biosystematists, led him to develop a comprehensive synthesis of plant evolution incorporating genetics. 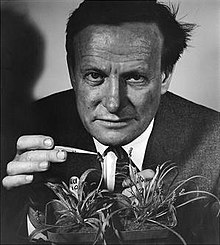 After a greater or lesser number of generations the mutants are eliminated.

No biologist has actually seen the origin by evolution of a major group of organisms.