General Gabriele D'Annunzio, Prince of Montenevoso, Duke of Gallese OMS CMG MVM (Italian pronunciation: [?abri???le dan?nuntsjo]; 12 March 1863 – 1 March 1938), sometimes spelled d'Annunzio, was an Italian writer, poet, journalist, playwright and soldier during World War I. He occupied a prominent place in Italian literature from 1889 to 1910 and later political life from 1914 to 1924. He was often referred to under the epithets Il Vate ("the Poet") or Il Profeta ("the Prophet"). 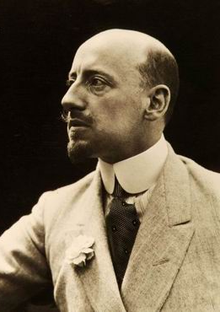 Until now I have never really lived! Life on earth is a creeping, crawling business. It is in the air that one feels the glory of being a man and of conquering the elements. There is an exquisite smoothness of motion and the joy of gliding through space. It is wonderful!

I cannot understand why the poets of our day wax indignant at the vulgarity of their age and complain of having come into the world too early or too late. I believe that every man of intellect can create his own beautiful fable of life.

It is not necessary to live, But to carve our names beyond that point, This is necessary.

It is not necessary to live, But to carve our names beyond that point, This is necessary.