Gail Kim-Irvine (born February 20, 1977) is a Canadian professional wrestler, professional wrestling valet, model and actress of Korean descent. She is perhaps best known for her tenure with World Wrestling Entertainment (WWE), where she won the WWE Women's Championship in her first match and also for her tenure in Total Nonstop Action Wrestling (TNA, now Impact Wrestling) where she is a record-tying former six-time Knockouts Champion, a record that she shares with Angelina Love. 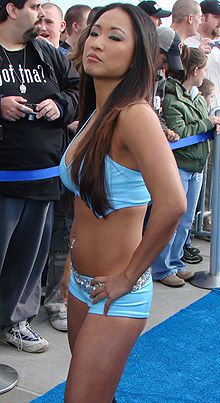 I'm not necessarily one to be remembered as a great, great speaker in wrestling, but I want to share my feelings about the people who have influenced me over the course of my career.

Wrestling is one of those things that make me emotional.

I just have to be me.

I think change is always scary but also always good.

As soon as you just walk through the curtains and the crowd's there, everything's good after that.

I've been wrestling for 15 years so my body hurts.

I'm always looking to top the last match, I'm always looking to entertain the fans and steal the show. Before I always thought that it was a case of opportunities, but I'm learning that it's all in my control and I just want to keep on doing what I'm doing by giving my best. I've got a couple more magical matches left in me and hopefully at some stage, I guess the biggest honour would be going into the TNA Hall of Fame.

Oh, and by the way, I'm gonna beat you tonight, and I'm gonna enjoy every second of it. Au revoir!

Your body has this instinct to start healing and then you go back to work and it hurts even more. It's almost better to keep your body messed-up on a consistent basis.