Gary Mark Gilmore (December 4, 1940 – January 17, 1977) was an American criminal who gained international notoriety for demanding the implementation of his death sentence for two murders he committed in Utah. After the U.S. Supreme Court upheld a new series of death penalty statutes in the 1976 decision Gregg v. Georgia, he became the first person in almost ten years to be executed in the United States. These new statutes avoided the problems under the 1972 decision in Furman v. Georgia, which had resulted in earlier death penalty statutes being deemed as "cruel and unusual" punishment, and therefore unconstitutional. (The Supreme Court had previously ordered all states to commute death sentences to life imprisonment after Furman v. Georgia.) Gilmore was executed by firing squad in 1977. His life and execution was the subject of the 1979 nonfiction novel The Executioner's Song by Norman Mailer, and 1982 TV film of the novel starring Tommy Lee Jones as Gilmore. 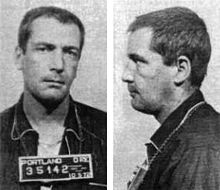 See you in the darkness.

I stagnated in prison a long time, and I have wasted most of my life.

It's been sanctioned by the courts, and I accept that.

There is an appropriate time to release somebody or to give them a break.

It's my life and my death.

There will always be a father.

One is inspired only in solitude.

#Be Inspired #Only #The One

I want freedom and I realize that the only way to get it is to quit breaking the law.