Gary T. Goodyear PC (born March 10, 1958 in Cambridge, Ontario) is a Canadian politician. He was a member of the Canadian House of Commons from 2004 to 2015, having been elected to represent the riding of Cambridge as a Conservative in 2004. On October 30, 2008 he was named Minister of State for Science & Technology within Prime Minister Stephen Harper's Cabinet. Goodyear was re-elected in the May 2nd elections in 2011 and returned to Stephen Harper's cabinet as Minister of State for Science & Technology. He was replaced in this capacity by Greg Rickford on July 15, 2013. 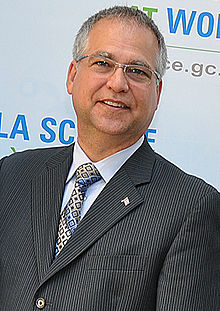 I am a Christian and I don't think anybody asking a question about my religion is appropriate.

Our Government is fostering economic growth in Kitchener, Cambridge and all of the Waterloo Region by investing in our innovative businesses. Today's announcement is a great example of how we are helping high-potential companies bring great ideas to market faster. Helping our entrepreneurs and original thinkers export their products and services to the rest of the world creates jobs, growth and economic prosperity here at home.

This investment will provide capital to help high-potential start-up companies transition from product development to market entry, while also providing skills training to help them position themselves to be more attractive to investors and commercial partners. We are pleased to support the entrepreneurial community in southern Ontario and contribute to economic growth and job creation.

FedDev Ontario's investment in the Glanworth Branch Library has enhanced this unique landmark into an accessible learning hub for local community members. When we improve facilities, we are strengthening our communities and building a prosperous southern Ontario.