Gary Arthur McDaniel (born February 1, 1954), better known by his stage name Chuck Dukowski, is a Californian punk rock musician, best known as a founding member and bass player for Black Flag. Dukowski wrote some of Black Flag's most popular songs, including "My War," "What I See," "I've Heard It Before" and "Spray Paint." He left the band before the release of My War, and afterward served as Black Flag's manager. Dukowski was also the co-owner of SST Records until 1990, after which he served as "Head of Sales" until leaving the label in the late 1990s. 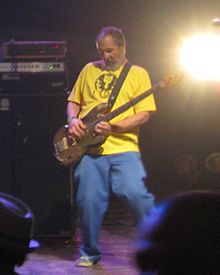 “Yes, they're recovering and they're doing better, ... But they still have a ways to go.”

“The stock price has become divorced from its underlying fundamentals driven by investor enthusiasm surrounding the television shows. It may take until the shows debut or until investors see that earnings aren't coming in for the stock to crack.”

“There's absolutely a consensus around the idea that they needed to cut costs at the magazine and that the decision they made today to invest in the magazine was the wrong one. They're investing a lot of money in a product that's at the end of its life cycle.”

“That brand is getting diluted by all these different endeavors.”