Gary Owens (born Gary Bernard Altman; May 10, 1934 – February 12, 2015) was an American disc jockey, voice actor, radio announcer and personality. His polished baritone speaking voice generally offered deadpan recitations of total nonsense, which he frequently demonstrated as the announcer on Rowan & Martin's Laugh-In. Owens was equally proficient in straight or silly assignments and was frequently heard on television and radio as well as in commercials. 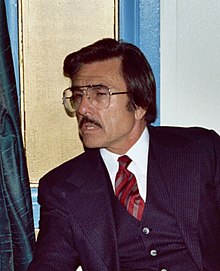 Then, when I got in the military, I used to host - even in high school - I hosted the talent shows, and when I was in the military I would host all of our base Christmas parties and stuff.

“Community history is something that people need to pay attention to.”

“We never really had this type of reunion. I thought it was important we celebrate those graduates.”

“I was very excited when I saw it and I went through it with my girlfriend and kid and we read the deals and was quite amazed by it.”

“The obstacles are there, and our job is to help them overcome those obstacles.”

My comedy isn't going to solve problems; I'm not that deep.